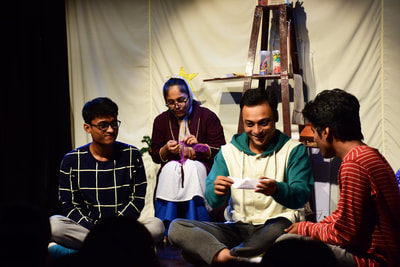 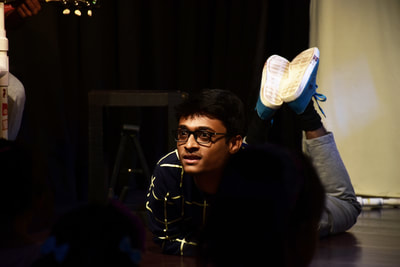 Enemy Pudding
A show in English based on Derek Munson’s book Enemy Pie
Performed in Bangla as Shatrudaman Payesh
A ThinkArts Production in collaboration with Jhalapala
​
The first collaborative production by Jhalapala and ThinkArts, this play is a beautiful story of friendship and appealed to children and adults alike in its premiere run in July 2018.

It was the perfect Christmas vacation for Joy. That is, until Akash moved in next door and became very popular even with Raja who was Joy’s best friend. This of course made Akash the top member in Joy’s Enemy List. Luckily Granny had a surefire way to get rid of enemies; Enemy Pudding! Joy was thrilled ……. but one of the conditions for the recipe to work was that he would have to spend one entire day with his arch enemy and that too, without any fighting. Enemy Pudding serves up a sweet lesson in the difficulties and ultimate rewards of making new friends.
Enemy Pudding has been performed in English as well as in Bengali (as Shatrudaman Payesh) and has witnessed consistent full houses by children who have come all the way from various schools and NGOs.  The response has been overwhelming to say the least.

Audience Response:
"Watching Enemy pudding with my daughters was a lovely experience. The actors were brilliant. The music kept us captivated. My 14 year old found it funny. Younger one was quite amused as well and has attempted to make the pudding at home. What she liked most was the activity book given to them after the show, her favorite part being creating her own recipe for Friendship pudding. We had the chance of watching it twice- once in English , next time in Bangla, we enjoyed both the shows thoroughly. A great show  for adults and children. It's a must see play for everyone!"

"Enemy Pudding is a must watch for children of all ages. Superb enactment and simple dialogues put across the deeper, profound message to the audience in a seamless manner. Sets costumes and direction are on point as is the entertainment quotient. Thoroughly enjoyable and relatable.​"

Director's Note - Santanil Ganguly
Enemy Pudding is our first venture with ThinkArts. Ruchira Das from ThinkArts is an associate director for this play.
We were keen to develop a play based on a book. We started exploring stories, read several books, had discussions and finally, we unanimously selected the book Enemy Pudding, written by Derek Munson.
From the very beginning, we- Ruchira and I, decided to develop the play through a collaborative process; the script, the main structure, music, the costume of play would be developed with everyone's participation and opinion. And that's how the play took shape.
Our main challenge was acting as a child while being an adult. In an attempt to understand their minds and expression through the language of theatre, we went through a series of workshops and observed children at play, in schools and at home.
I thoroughly enjoyed the whole process and I hope we can share this happiness with the children and adults.

About Jhalapala
Jhalapala is a Kolkata based theatre group for children aiming at making theatre activity a source of creative joy. Founded in 2nd November 1996, Jhalapala has sailed through a long and exciting way. Jhalapala believes – ‘Theatre is a trusted mirror of human history and life.’ Through its theatre activities with children, Jhalapala not only tries to capture that reflection but also aims at reconstructing a new enthusiasm for life.