TEEN TAKEOVER @ MMB
​The Next 60 As Imagined By Young People 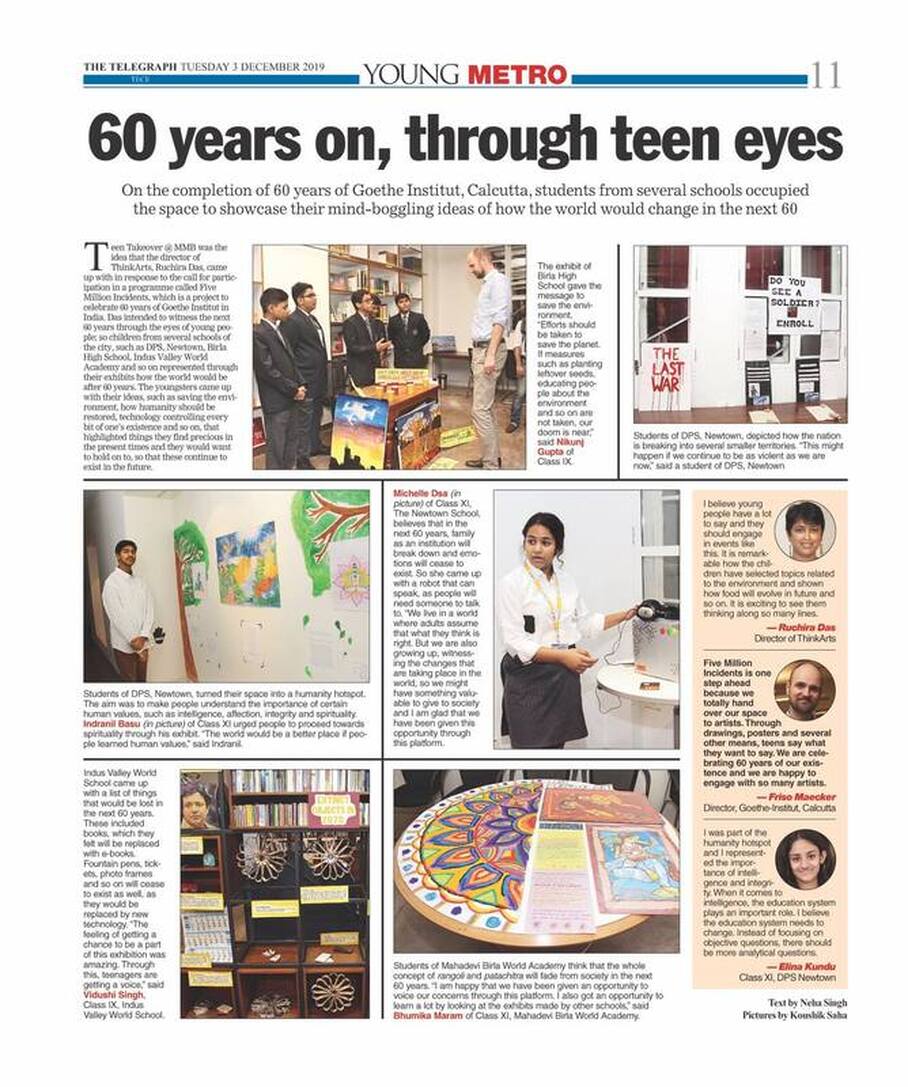 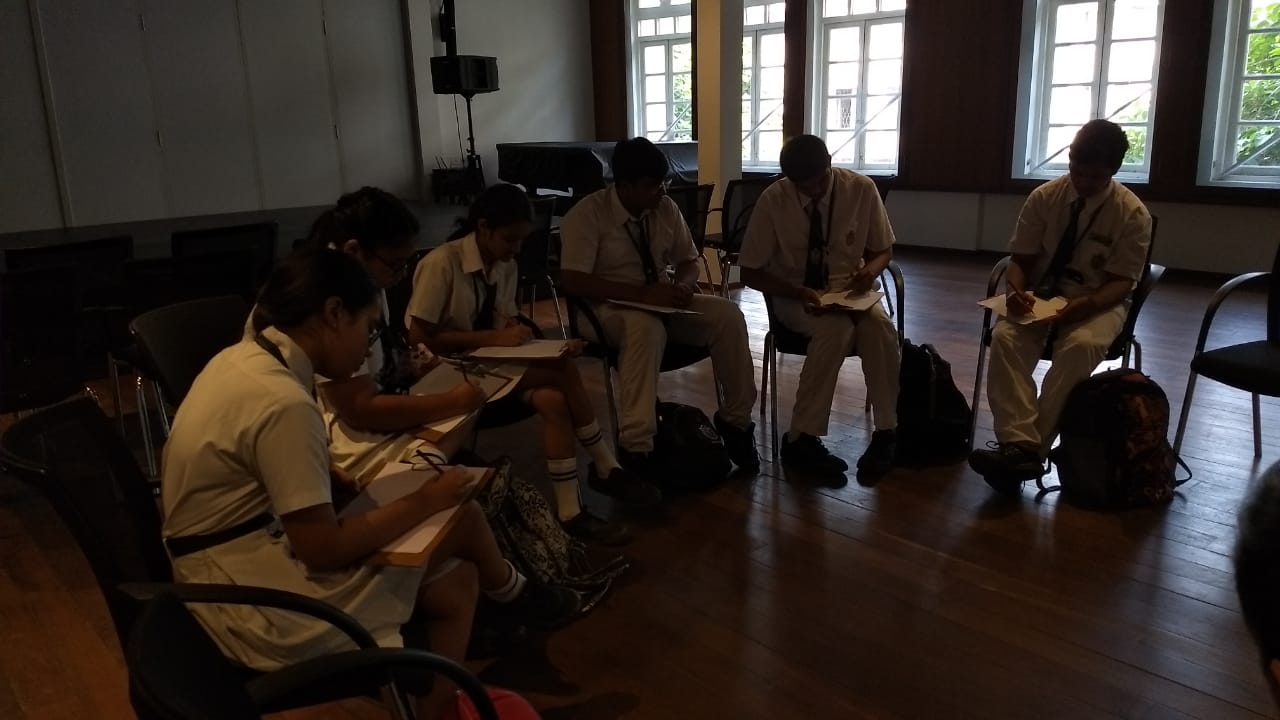 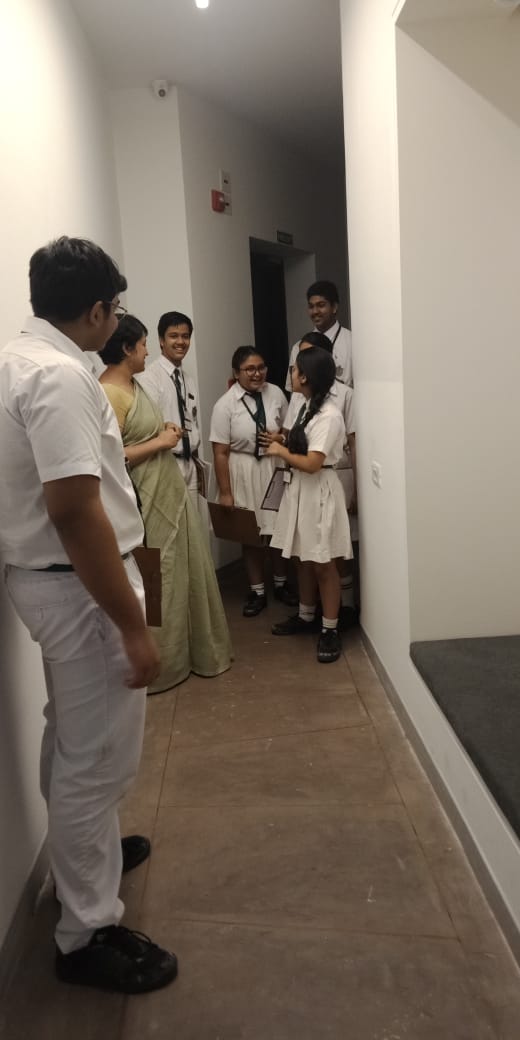 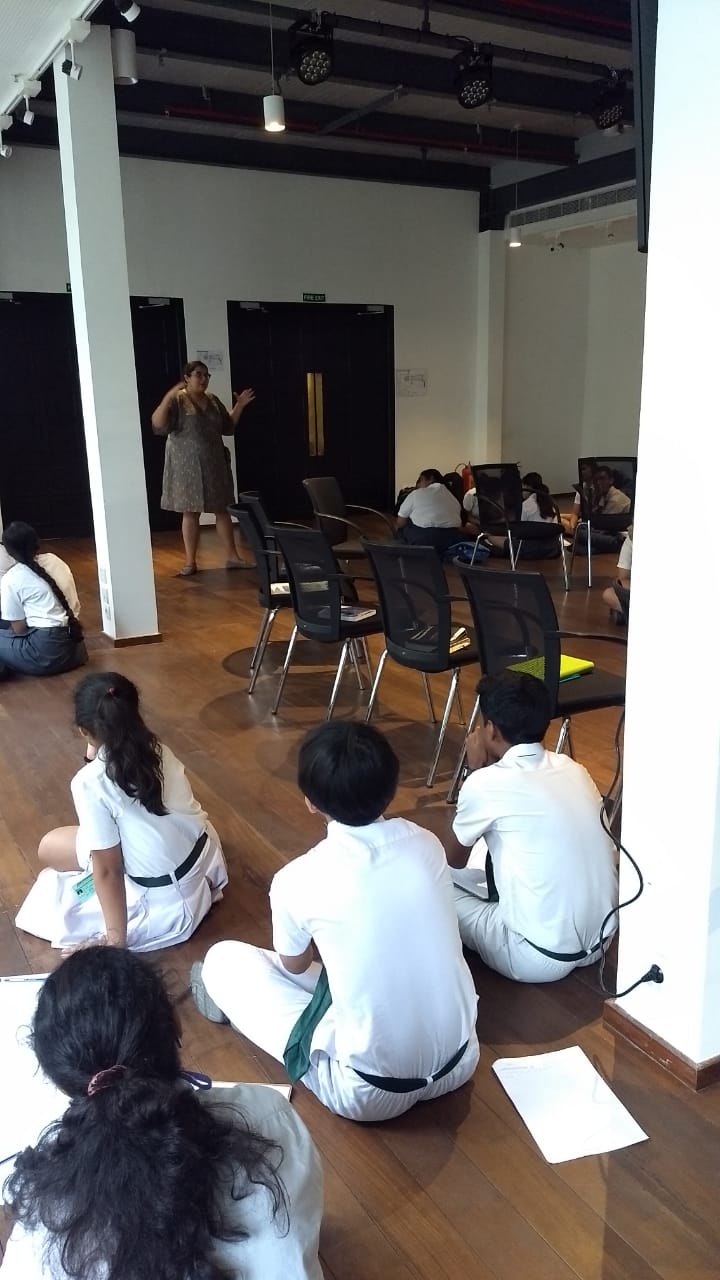 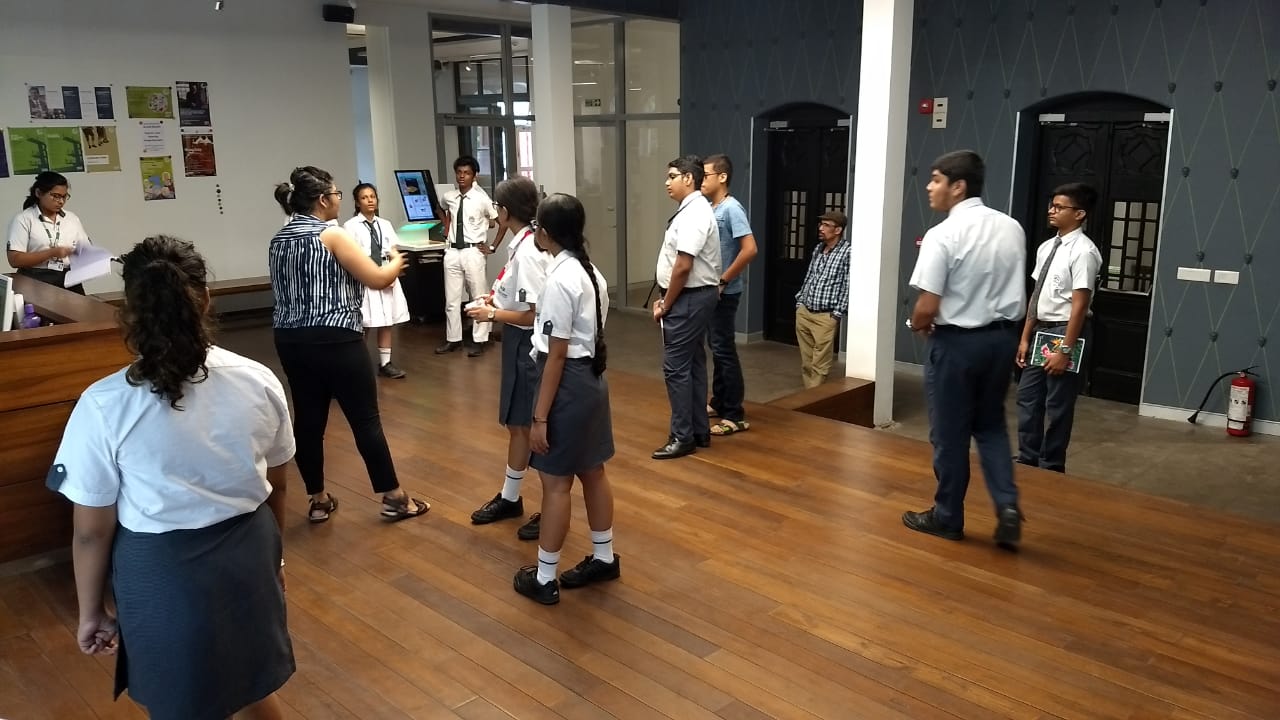 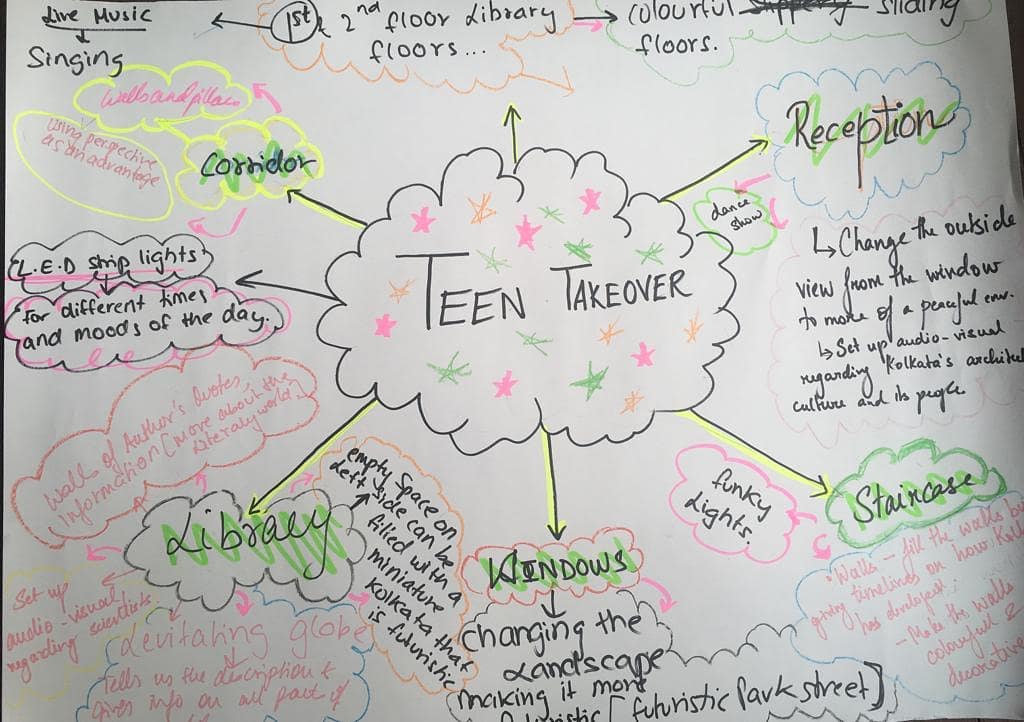 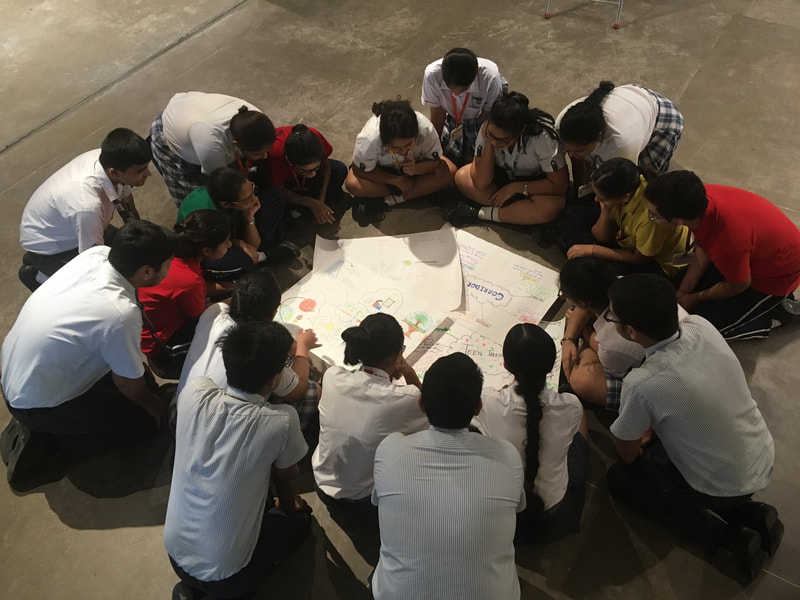 Teen Takeover @MMB was awarded to Ruchira Das, Founder & Director at ThinkArts - presented within the framework of Five Million Incidents, an initiative by Goethe-Institut / Max Mueller Bhavan New Delhi & Kolkata in collaboration with Raqs Media Collective. It has been envisaged as an invitation to the teenagers of Kolkata to imagine the next few decades not through the lens of technology; but through the lens of human emotions and society. The project started taking shape at the Goethe-Institut / Max Mueller Bhavan in Park Street, Kolkata. Six students from Delhi Public School, New Town accompanied by their teacher came to the venue for a session with ThinkArts. The children - all from 11 std. - were given a brief of the project and what they will be involved in over the next few months.

Through discussions and dialogue exchange, the children opened their beautiful creative minds about how they envision the World in the coming few decades, that very much forms the core idea of the project. They were asked to pen down their thoughts which finally trickled down to a mind map, a part of which is supposed to be executed by them for creating the exhibits. Apart from ideas the children came up with poetries, sketches and even showed their musical skills in that short time span. In between, they were given a tour of the place inside where the exhibits they create can be finally
installed.

The next session was held with as many as 25 students from 6 different schools. The place was brimming with life with ideas and concepts pouring in from the minds of the young people. The children were briefed about the project by Ruchira Das. She also talked about the importance of working collaboratively in a shared space while keeping the sense of competition far away.

Similar to the first session, the children were given a tour of the place through the reception area, the libraries, the walkways were the final installation will be put up. Soon after a short break, they stormed their minds to come up with ideas that they will work on.

One of the special benefits the children had in this session was the sudden turning up of artist Sumona Chakravarty whose practice explores the role of participatory art and design practices in creating spaces for civic engagement. Very deftly and with all her experience, she communicated with the students about the concept of space and  audience and how they can extract meaning out of any space through some elementary questions.

The September sessions of Teen Takeover were held on 11th and 14th at the Goethe Institut. Participants from 4 schools accompanied by their teachers took part in the session that was on space activation. On both the days the sessions began with a tour of the inside that is now thriving with beautiful and significant installations in various forms by a range of actants. Overwhelmed at the artworks, the students found a new vigour towards their own work. Over the next hour, after a well detailed concise guidance by Ruchira Das and Abheri Dutt on the two days, the children brainstormed collectively and came up with ideas that had hope written on them all-over. Concepts ranged from robotic interference in the future to ideas that populates regions with trees. It was heartening to see young students of this time having cognizance of environmental and socio-political scenario and not afraid to get into conversation over these.

After a short break followed by a discussion involving the students, the schools were allotted specific regions to work on for the installation. They were extremely happy and anxious as well to see their work taking shape gradually coming to life.

The final session happened in the month of October after the long festive season. The students came up with their detailed plans having done their research. They put forward their reasonings for choosing the topics that they had thought of working on, supported by the findings they had made. With the world being in such advanced stage of technological achievements it is the natural tendency of young minds to see the future like that - a world filled with drones and robots attached to every facets of living. However, they were reminded of the fact that it’s not what we as humans are striving for. Our concern is the gradual erosion of human emotions, the continual rupture seen in the everlasting bond between humans and nature. Quickly and swiftly the seeds were sown in their minds and that showed in the newer ideas they came up with. Humanity Hotspot, book of extinction were some of the ideas that saw the light of the day.

There’s no end to reimagining the future in terms of what we wish to see and how we wish to see it. They are often dotted with moments of anxiety but that crops up from the testing times we are living in now. And when such vision comes from the minds of the ones who will guide the humanity in the future, a whole layer of meaning gets added to it. Such is the hope that Teen Takeover gives.

RESPONSES from the participants

It was amazing. The different idea led us exploring more about ourselves and how we think our future will be. I am very curious about the last day when we will get to see the final exhibition . - Srishti

I felt the workshop was very unique and an innovative way to enrich the art and culture in the students. I would love to attend the upcoming workshops too as today was a total success.. - Khushi

It was an amazing experience .  The idea was very different . I never thought that for a 60th anniversary someone could have thought anything like this . - Tanisha

I enjoyed today and am super excited about the process of working together to create something magnificent because I feel like, Teens our age aren’t given opportunities or the freedom to experiment and work in this kind of space. - Michelle

It was an amazing and great experience. This workshop is a very innovative way to use our imagination and I look forward to an amazing exhibition. - Anuraag
FEEDBACK from teachers


Ritwika Ghosh of Indus Valley World School - Unique project where the teenagers get a scope to learn in interesting ways and also get a platform to bring their creative side to the front which usually is not a part of their school curriculum. The innovative nature of the project makes the kids get involved in a more engaging way while also keeping in mind several other factors like time management and concept building that has larger implications in wholesome development.


Piu Mahapatra of Birla High School - Learning should be an experience and it should also be holistic and wholesome. The afternoon spent here in Max Mueller Bhavan with my students will definitely be a memory for all of us. Two thumbs up to Teen Takeover and Ruchira and her team.