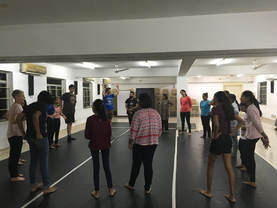 This led to the co-development and delivery of a successful residency in Kolkata (October 2017), where Christine worked with local teenagers, artists and elders.  The transformative impact of the residency is clear:

“As a teenager, I've had conflicts within me, couldn't live up to expectations, and couldn't express myself. But this workshop brought a change in me. I came to know myself better, what I really want and how to go about it. It was nice to hear my own thoughts echoed by other teenagers.” Amrita, participant

“My elder son recently turned 14 and remembering my teenage years, I was happy to receive a mail from ThinkArts regarding the Teenage Trilogy workshop.  He didn’t share too many details with me and I didn’t press him for any, because I knew there would be a presentation, which I was expecting to be charming and moving.  I was not expecting to have the wind knocked out of my sails and being reduced to a blubbering mess; I was moved beyond measure. I remember my pain and confusion during my teen years, but to come face to face with my son’s — that was a tough realisation and tougher acceptance” Baisali, parent

This shared experience has inspired both organisations to continue our cultural and creative partnership and aim to undertake a further project in March 2018 focusing on the digital and performative elements of this ambitious UK/India collaboration.
My belief is that young people are creative intelligent beings full of potential, from whom we can learn, and it is my passion to provide young people with keys to unlock and connect with their creativity.  My recent experience of being in Kolkata with Think Arts was such a rewarding experience.   Whilst reserved at first, I was so inspired by the openness of the teenagers once they realised I really wanted to hear their voices.  Although the time we worked together was relatively short, their contribution will have a real impact on Teenage Trilogy.  There is such rich potential for further collaboration to deepen and broaden our mutual creative and learning experience by making something together which we can share across cultures”.      - Christine Devaney, Curious Seed, Scotland


“At Think Arts we strive to bring imaginative experiences for children and young people through an engagement with the arts.  Ever since I began working at Think Arts, I have been concerned with the lack of high quality creative engagements for young people. While there are some companies that create work for children, the focus is mostly on younger children (ages between 6 and 12). Teenagers are often not within the remit of the target audience for such productions and are sometimes too young for performances created for an adult audience. Both my daughters (aged 3 years apart) had enjoyed the various dance performances we had watched together during our travels, but I was surprised to find that there is no contemporary dance company in India that creates work for young audiences, and had been thinking for a while about what one could do to address this vacuum.

When I watched the work in progress of Teenage Trilogy at Imaginate, I found so many moments in the piece that would resonate with teenagers in India, I wondered if this could indeed be the starting point of a creative engagement with them. Later when I spoke to Christine and other members of Curious Seed, it was clear that we spoke the same language and were both keen to explore ways of working together.  I felt that a residency around the Teenage Trilogy would be very useful not only for the teenagers who would directly be working on the project but hopefully will also inspire dancers in India to create work for young audiences. I was excited at the possibilities and couldn’t think of a better company than Curious Seed to take the first step with.

I am really glad that we decided to together organise the residency with Christine in Kolkata earlier this month. Although we were able to only dedicate a few days to it, the impact was quite evident at the sharing. It was a visceral process for the teenagers, and the dancers and older people at the sharing were also moved. I believe that if we could develop this collaboration further, we would able to further the impact and indeed reach many more teenagers by sharing the response piece and by inviting them to contribute to the digital collection of teenage voices from around the world”.

Curious Seed’s new work in development, Teenage Trilogy, is a visceral, affecting and relevant work which evokes the transition from childhood to adulthood that we all must go through presented through live performance, exhibition and digital media.  This work has been shaped through dialogue with teenagers, parents and grandparents in Scotland, Denmark, Belgium and Australia, listening to their personal experiences through informal discussions and creative workshopping.  We are also working with intergenerational groups in partnership with Tramway (Glasgow) and Horsecross (Perth Theatre) in Scotland, who are the main co-producers of the work.

Creating and Filming of Response Piece
The residency in October is the catalyst for a legacy project for those involved locally to continue to work together.  After the production of Teenage Trilogy has been premiered in Scotland (February 2018), we will return to Kolkata in March to the different communities that Christine previously engaged with, working with the teenagers and dancers to collaborate on the creation of a piece of work in response to their recent experience of the Teenage Trilogy residency and their ongoing engagement with the project. It is planned that the response work created would in future be taken into schools in the region through the ThinkArts network.  Teenage Trilogy will tour Scotland in autumn 2018; a filmed version of the piece created in Kolkata will also feature as part of a public showing of other response pieces created by other groups in Scotland.

The work will be led by Christine Devaney who will design and deliver the project in collaboration with Ruchira Das.  Joining Christine from Scotland will be David Maxwell, a Glasgow- based visual artist and film maker who has collaborated from the beginning on the research for Teenage Trilogy.  Together they will work with two local dance artists and a visual artist.