We were delighted to receive some wonderful applications for our ThinkArts Grant 2021
​and we’re excited to introduce the 5 grantees for this year! 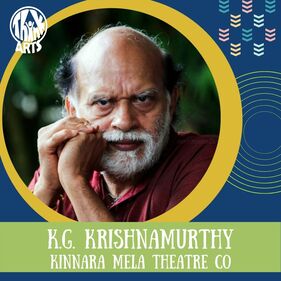 KINNARA MELA THEATRE COMPANY
Kinnara Mela Theatre Company is a group of adult actors performing for children. The Company was established in 1990 in Tumari village in Karnataka with the aim to bring plays to children, travelling to educational institutes and presenting performances that can coexist with academic schedules instead of disturbing them. The Company develops two plays each year and averages 100 performances, reaching an average of 1,00,000 children per play. In the last 30 years Kinnara Mela Theatre Company has produced more than 65 plays in schools as well as at theatre festivals meant for children, gaining them national recognition for their work.
K.G. Krishnamurthy, artistic director of Kinnara Mela Theatre Company is a graduate from National School of Drama New Delhi.

NEEL SENGUPTA
Neel Sengupta is a director, actor, and educator living in Delhi. He is the recipient of the Tendulkar-Dubey Fellowship 2019 for Excellence in Theatre and has been creating work in Delhi, Mumbai and Bangalore. Neel has headed the content and curriculum of the entire arts programs in Delhi schools, and has since been associated with several schools across Delhi/NCR, Mumbai, Bangalore, and Pune as faculty as well as to develop arts programmes for them. His play 'Raavan Aaya' (based on Sukumar Ray's 'Lakhoner Shaktishel') used mythological tropes to start conversations around government systems, power, and corruption, and was performed in 40 schools across the country.
Neel is part of the theatre faculty at Shiv Nadar School, Noida, responsible for the curriculum development of the Integrated Arts Program at the Middle and Senior School level.

RAHUL THOMAS & SIDHARTH VARMA
Rahul Thomas is a theatre maker, storyteller & educator.  He has facilitated numerous storytelling sessions and theatre workshops for children at literature festivals, schools and community spaces. He is also working as a theatre pedagogue in Head Start Educational Academy, Bangalore since 2018.

VARUN NARAIN
Varun Narain is a puppeteer who believes in blurring boundaries. He is both alumnus and visiting faculty at the Mass Communication Research Centre, Jamia Millia Islamia, New Delhi where he lectures the MA programme in Development Communication in Puppetry and Traditional Entertainment.
Varun was the first artist-in-residence to be facilitated by Pro Helvetia at the Schlachthaus Theater, Berne, Switzerland. He received a New Performance grant from the India Foundation for the Arts, to develop an Indian adaptation of the ballet Giselle. His performative installation on global warming Photosynthesis by Moonlight was performed in schools and colleges in Delhi. His production of Ginger and Cacao premiered at the opening soiree for the India Art Fair 2019 at the Embassy of Switzerland. Varun has recently created and performed for virtual platforms such as Serendipity Arts Foundation; Kahaani Online (Teamwork Arts) and The Same Boat Theatre’s festival ‘Earthquake’